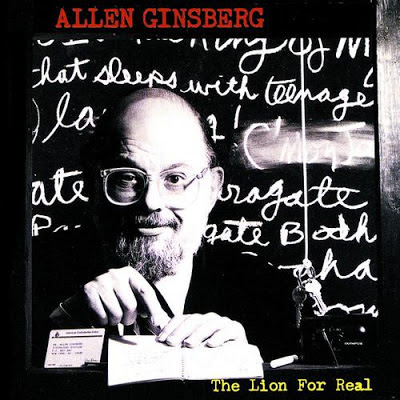 producer notes:
During the summer of 1986 I met Michael Minzer who runs Paris Records in Dallas. Michael always had a major interest in literature and produced many concerts and recordings of poetry and music. He was looking for someone to produce an album with Allen Ginsberg for his company - Michael had already recorded Allen performing Blake's "Nurses Song" with Steven Taylor and the Garland Chamber Symphony for a compilation album "Made Up in Texas"(1986) and was ready to record a full album with Allen. Familiar with some of my multi-artist tribute productions, Michael thought I'd be the right person to do this project.

I knew much of Allen's work. I've seen him read from his works a number of times and owned a few of his recordings including "Kaddish" (1963) on Atlantic Records, "First Blues" (1982) a double album on John Hammond's label, and "Howl" (1959) on Fantasy. Those records worked wonderfully in their own way (basically documenting the moments) - but I felt that this record should be something different. Ken Nordine's "Word Jazz" records were spoken word LPs, yet came across as music albums. I wondered if an album with Allen could do the same thing. It was a challenging project and always looking to get involved in potentially dangerous situations, I took Michael's offer.

At the first meetings, Allen seemed suspicious. He obviously had gone through some strange experiences with making records before, and that I had only some general conceptual ideas didn't really help. A few months later an album that I produced for Marianne Faithfull ("Strange Weather") was released and Marianne played the record for Allen at the Naropa Institute in Colorado where they were both teaching. Allen liked the album and with some encouragement from Marianne, he became enthusiastic about our project. Shortly thereafter an approximate recording period was scheduled.

To start, both Minzer and I read Allen's complete works, now easily available in two volumes by Harper & Row. We each made a list of about twenty poems that we thought would work well with music. Allen picked about eighty. One night he read almost all these to me in his apartment accompanied by a neighbor screaming out of his window to shut up. We then decided on about fifty poems to consider. Next I called about a dozen of my favorite composer/musicians that I felt would be right for the project, gave some his collected poems, and invited them to A&R Studios in New York to hear Allen record.

Ginsberg read poems that we picked out, with additional requests from the musicians, for about six hours in the studio while we sat in the control room - an amazing night. We gave the evening's tape copies to musicians and invited them to pick about three poems and compose music. We met separately later that week and picked the best poems for each to work on.

The week that we spent recording went extremely well. Each night everyone would arrive between seven and eight in the evening and pieces would be presented by the composer, rehearsed and recorded with Allen reading the work live. Then we'd go to the next composition. After the first performance broke the ice ("Refrain"), everyone's nervousness disappeared and the sessions went by quickly and smooth. We averaged four poems recorded each night. Character contrasts were great, from an insane Gary Windo arranged number to a beautiful Steve Swallow composition within a few hours; personalities from Beaver Harris to Arto Lindsay would float in and out of songs. Allen, who was never quite in a situation like this before, adapted quite well and kept everyone's spirits high. At the end of the week, we had twenty-one numbers recorded, of which we decided to complete all but one.

Chris Blackwell and Kim Buie of Island Records heard the results and immediately wanted to release it to start a series of spoken word great poet/musician collaborations on their newly formed Jones label. After a few sequence changes and interesting debates on what tracks to delete, the record was finished.

Thanks go to everyone associated with this project. Of special mention is Joel Tornabene who put Michael Minzer and myself together, Joe Ferla for being alive, Fran Tose for her help at the start of the album, Marianne Faithfull for her valuable friendship, and especially Allen Ginsberg for putting himself and his art in our world and taking the chance. I still don't know what the reaction will be, but hope the enjoyment that went into the record shows.

I'll be seeing you.
Hal Willner

3. XMAS GIFT (1: 49)
(Words: A. Ginsberg/M. Bingham)
The calm Princetonian world of XX Century science, a hint of Psychedelic Cosmic Consciousness discussing the Universe's origin (as Buddhist wd say 'Unborn'), a flash of comfy Country Club and odd awakening to the Bomb 1972. I was too Shy to rebuke kind Mr. Einstein for this hideous karma. Mark Bingham's strains carry this literal dream.

4. TO AUNT ROSE (3:29)
(Words: A. Ginsberg/Music: M. Ribot)
A memory flash 1958 Paris. My favorite Aunt Rose (19009-1940) took car of me weekends when my mother was ill-Books named are my late father Louis Ginsberg's. It was a big event to publish a volume of poetry those days! Rose Gaidemak died of septicemia. Note delicate music box time travel invention by Marc Ribot.

6. REFRAIN (3:29)
(Words: A. Ginsberg/Music: Michael Blair)
Among the earliest writing in this suite, echoing late Yeats' style. "Shadow changes into bone,"was my Kerouackian motto 1948, intending to say that eternal prophetic intuition (shadow) will turn out to be real (bone). Having heard Blake's voice I was headed for the booby-hatch for a season. Michael Blair's arrangement's midnight reflectiveness fits this rhyme's mood & meter.

10. THE END (2:04)
(Words: A. Ginsberg/Music: M. Ribot)
A psychedelic condensation of the Tibetan Book of the Dead, scary & somewhat theistic in conception, in continuous rhythm as if there were a great being like Father Fisheye at the end or bottom of the 1960 Universe. Marc Ribot's music's appropriately eerie.

10. THE END (2:04)
(Words: A. Ginsberg/Music: M. Ribot)
A psychedelic condensation of the Tibetan Book of the Dead, scary & somewhat theistic in conception, in continuous rhythm as if there were a great being like Father Fisheye at the end or bottom of the 1960 Universe. Marc Ribot's music's appropriately eerie.

13. HUM BOM! (4:00)
(Words: A. Ginsberg/Music: S. Swallow)
Written at Atlanta 1971 interracial Vietnam Peace Protest, based on Shivite ganja-smoker mantra to Creator/Destroyer, performed as sound poem 1984 at Folk City. Don Cherry alchemized my complaining downer cry 'Whom Bomb?' by turning it around, "You don't wanna bomb! Who Said Bomb?" & I picked up how to transmute the bomb fear mode to straightforward constructive suggestion: "We don't bomb.' Steve Swallow surprised me, sophisticating raw paranoia into laid-back disco propaganda.

14. KRAL MAJALES (5:11)
(Words: A. Ginsberg/Music: M. Bingham)
I was elected King of May 1965 as poem describes, I was kicked out of Prague, wrote this on airplane to England; same week found myself in Croyden Hotel room with Dylan & the Beatles, later stood on Thames Embankment watching poet Dylan flash Subterranean Homesick Blues key phrases on display cards for his historic Dont Look Back movie camera.

16. ODE TO FAILURE (2:45)
(Words: A. Ginsberg/Music: M. Blair)
The most recent poem (1980) on this record. Michael Blair's music changes with shiftings of thought, & punctuates my phrasing. Whitman from Song of Myself: "Vivas to those who have fail'd/And to those whose war-vessels sank in the sea!...Not a mutineer walks handcuff'd to jail but I am handcuff'd to him and walk by his side,/I am less the jolly one there, and more the silent one with sweat on my twitching lips.' Vladimir Mayakovsky: "Die, my verse, die, like the rank & File,/as our unknown, unnumbered, fell/in storming heaven" (At Me Top of My Voice, 1930. Tr. Herbert Marshall). Yes I failed, everyone born dies, accepting failure makes success of life.