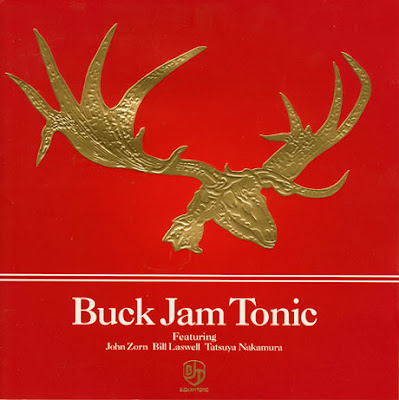 Buck Jam Tonic is a double album of improvised music by John Zorn, Bill Laswell & Tatsuya Nakamura. The album was released on the Japanese Wilddisc label in 2003 and is comprised of one disc mixed in Tokyo and another mixed in New York City. A vinyl edition was also released containing only the Tokyo mix.
The two discs make a neat set: the first was mixed by drummer Tatsuya Nakamura, while the second features three Bill Laswell interpretations of the same sessions. An obvious result is that there's some overlap of source material between the discs (see the samples of "Nu," from the Tokyo mix, and "Tzu," from the New York mix), but where Nakamura's tracks are rough-sounding little nuggets of rock, Laswell's are denser epics that build and ebb dramatically (across a wider spectral range, too) over the course of 20 or 30 minutes. Furthering the variety, John Zorn actually played alto and soprano sax that day instead of just honking, and Laswell pulled out some monstrous "boWAAAAAAAOW" noises to really get the blood flowing; the effect is a lot like the ugly muscle of Execution Ground, only with way peppier drumming. Hearing it through two different sets of ears gives BJT some replay value beyond its fist-pumping qualities, too, so it's more than just a replacement for a concert experience. Get past the awful name and hideous cover, and there's plenty to enjoy. - Taylor McLaren