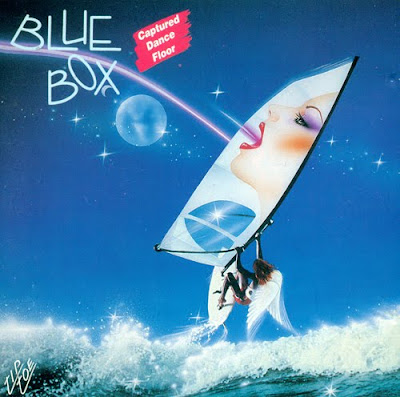 Captured Dance Floor is an odd one I picked up on my electric Jazz travels in the late eighties. The cover artwork is not to my liking but I'm guessing it is meant to be satirical.
A stripped down Toshinori Kondo's IMA spring to mind on re-listening, an intriguing mixture of funk, techno, experimental jazz.

Blue Box is a cult. The name itself is a programme. For twenty years this band has succeeded in over layering each period with its music, much like the blue box technique used in film making. The jazz trio does not go along with the prevailing musical trends but cultivates styles that go against the drift and charts a new course. In the early eighties when DJ club jazz was still in its infancy, the new-age music produced by Blue Box upset the jazz purists. Some called it ‘techno jazz’, others ‘no wave funk’, and some ‘industrial dance’.
Their third album "Captured Dancefloor" reflected the rise of dancefloor jazz in the late 80s. Charismatic trumpet lines communicate with complex rhythms and driving bass grooves: The sound of Blue Box was way ahead of its time and soon turned this trio into a cult band.


Reiner Winterschladen • Trumpet, Vocals
A member of the NDR Big Band since 1995, participated in numerous recordings for jazz labels, radio and TV. Over the years he played some very distinguished solos on albums of the Nighthawks, the Klaus König Orchestra and Ensemble Indigo

Alois Kott • Acoustic & Electric Bass
bass professor and founder of several ensembles, has been a professional musician for 30 years. He made recordings for ECM, Enja, Intuition and other labels and composed works of chamber music for the WDR.

Peter E. Eisold • Drums, Percussion & programming
is best known for his work on the experimental and alternative concert scene. He played with groups like the AOS Ensemble and Modern Percussion Quintet and was the drummer in Helge Schneider's Big Band.