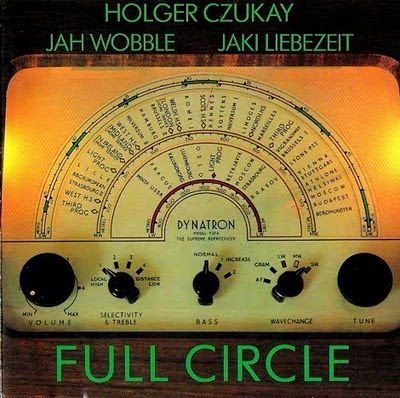 I have never understood why this record has always been so overlooked and severely underestimated. Even in the tons of praise heaped on Can in recent years the cursory mention given to the solo recordings of Can members tends to ignore or dismiss this fantastic disc.

During Can’s later years the influences of dub and ‘world’ music watered down the unhinged aggression and sheer naked artistic intent of their earlier recordings. However, here those influences give the record a hue, rather than sloppily splashing gaudy colour all over the place. The zany professor tendencies which Holger exhibits to occasionally irritating effect in his solo work are reigned in here as he has to restrain himself in the context of his collaborators.

Reading between the lines of the statements made about this collaboration by all concerned it seems that Wobble’s relationship with Czukay and Liebezeit wasn’t totally harmonious. Maybe this is the reason why there is a distinct lack of the mawkish sunniness which ruined later Can records, although the fallout from Jah Wobble’s involvement in PIL’s ‘Metal Box’ is also a major factor. Whatever the reasons, there is definitely a darker, more sinister edge to this record than anything the Can members had recently recorded.