The Tony Williams Lifetime • Turn It Over (Redux) 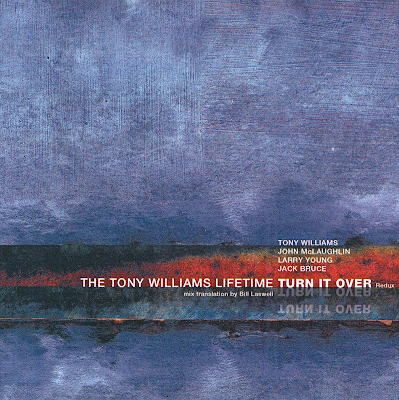 A rare, unreleased version of The Tony Williams Lifetime album, Turn It Over. Expanded, remixed, and remastered by Bill Laswell from the original Polydor master tapes.

In 1999, Bill Laswell decided to re-imagine this seminal jazz fusion album. However, Verve Records refused to release the album once it was completed, claiming it would never sell. However, it was released on CD-R directly to a small music shop in New York City frequented by Bill Laswell himself, the Downtown Music Gallery.


Unabridged version of the complete album includes 4 UNRELEASED CUTS, AND 5 LONGER UNEDITED VERSIONS from album sessions - which was intended as a double LP but only released as an editied single LP; cover art by Russell Mills, liner notes by John Szwed. Thanks to Bill Laswell for rescuing, and finally giving a proper mastering to match William's original intentions, to this most seminal, groundbreaking recording, mixing jazz, rock, prog and metal years ahead of virtually everyone else!

Review of the shorter LP version: "The better of the two albums the Tony Williams Lifetime recorded in 1970, Turn It Over, is a far more focused and powerful album than the loose, experimental Ego, and one of the more intense pieces of early jazz-rock fusion around. In parts, it's like Jimi Hendrix's Band of Gypsys with much better chops. It's more rock-oriented and darker-hued than their debut, 1969's Emergency!, and the temporary addition of ex-Cream member Jack Bruce on bass and vocals alongside stalwart guitarist John McLaughlin [with whom Bruce recorded the instrumental album 'Things We Like' just before this] makes this something of a milestone of British progressive jazz. The album's primary flaw is that unlike the expansive double album Emergency!, these ten songs are tightly constricted into pop-song forms -- only a swinging cover of Antonio Carlos Jobim's "Once I Loved" breaks the five-minute mark, and then only barely -- which reins in these marvelous soloists too much. This is particularly frustrating since pieces like the two-part "To Whom It May Concern" feature some outstanding solos (especially from McLaughlin and organist Larry Young, the group's secret weapon) that are frustratingly, tantalizingly short. Expanded to a double album [as originally intended, and as this CD edition finally reveals], Turn It Over would probably surpass Emergency! as a pioneering jazz-rock fusion release; as it is, it's an exciting but mildly maddening session.