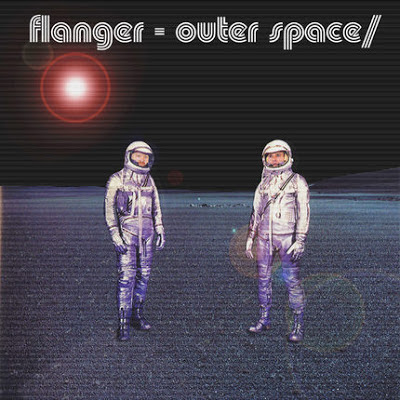 With 2001's Outer Space/Inner Space - how apt a title and motif for this space odyssey! -- Flanger vault even further forward into the future of jazz while somehow managing to keep one foot in the roots of hard bop, free jazz, Latin jazz, and samba. The grounding element is most likely the core of guest musicians, including players from Cologne, Germany; Copenhagen, Denmark; and Santiago, Chile. On the title track a robotic voice chants "outer space" over decidedly retro Latin jazz rhythms augmented by occasional synthesizer flourishes and beats that are equal parts organic percussion and electro loops, again blurring the line between jazz old and new, which appears to be the Flanger modus operandi. "Galak" is an astronaut's floating dream with its fluid blend of spacy vibes and earthy acoustic bass, its spiraling ascent chased along by dueling congas and fusion guitar. A squelchy computer rhythm clashes with driving acoustic drums while two keyboards and processed bass and guitar battle it out furiously on "The Man Who Fell to Earth," evocative of a more down to earth (so to speak) Squarepusher. A sexy Rhodes fuels the robot dance of "Inner Spacesuit," while flailing funk bass propels the sci-fi theme "Le Dernier Combat." (Is that a Spanish-speaking musician announcing something like "I'm drunk" on the fade?) The zenith, and mission statement, of this album is "It Ain't Rocket Science," with its dueling Coltrane-esque saxophones and grimy techstep beat programming that perfectly meld the origin and the destination of modern jazz. Apparently it takes two forward-thinking and often whimsical German composer/multi-instrumentalist/deconstructionists and their host of multiethnic trad jazz players to bring the groove to the sometimes stiff world of jazz and launch it into the future.