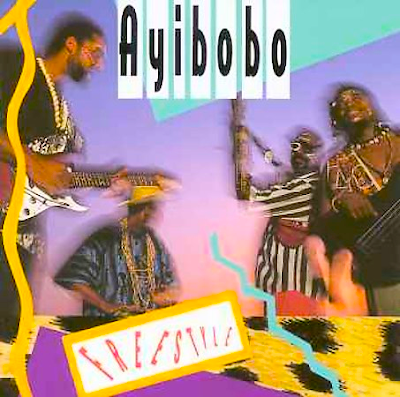 At the time of the Duvalier regime (1958-86), Roots music was considered subversive on Haiti and was banned as a result. However, groups formed in the island's forests and fought the ban with their music. Such a group was Foula, gathered around bassist and bandleader Chico Boyer. In the early 1990s, as repression increased, the musicians left Haiti and founded Ayibobo, together with Jean-Paul Bourelly, in New York. The band's concept combines Voodoo music traditions with the aesthetics of modern urban improvisation. Rosna, the band's singer, is a fascinating figure: the incarnation of gracefulness and femininity within Voodoo culture - Brooklyn style.

Freestyle's fusion of Haitian singing and drumming with jazzy horns and guitar finds Ayibobo's leader, guitarist Jean-Paul Bourelly, looking back to his heritage for some inspired new ideas. The result is danceable, pan-cultural jazz at its most enjoyable, exemplified on songs like "Voodoo Blue".

Recorded at Eastside Sound, New York,
between April 30 and May 24, 1993
Produced by Jean-Paul Bourelly