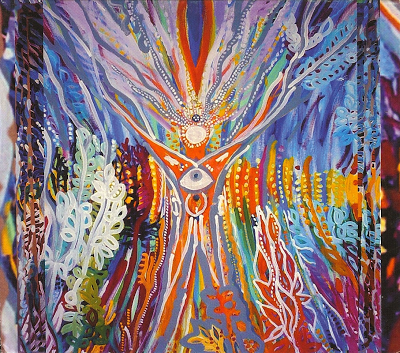 Summoning the Orixás
Hank Schroy, co-producer with Jorge Amorim talks to Austin John Marshall, editor of Contents Under Pressure about their exploration of an ‘unfathomably ancient’ tradition…


How did the project begin?

“At the outset I could have told you something about Yemanja or Xango, but didn’t have the faintest about Nana, Ewa, Oba and many others. Jorge grew up in Umbanda; his grandmother raised him in and around the ceremonies and temples of these religious practices, and this is the foundation of his approach to the drums. But he was also vague on the story behind this or that Orixá.

“So this all began as a study of the chants and percussion patterns of various Yoruba sacred traditions; Candomblé, Umbanda, Santeria, and Ifa… The result is 16 songs, each an offering to a different Orixá. While learning more about Exú, the parallels with Elegba of Haitian Vodou became clear. Both symbolize an opening of the gates for all things to come.

“By offering up this collection for the general listener, we hope to further the cause of those musicians laying down the rhythms of a new loving universality.”

But aren’t global trance grooves derived from diverse traditions creating a new hazard; of rounding up the endangered musical treasures of the world into the land of the bland?

“The Orixás emerge from an unfathomably ancient tradition with ingredients so primal, we feel sure this collection will stir some zest & pungency into the mix!

“Artists know their best work is an offering; a stone tossed on the water, ripples spreading in unpredictable ways. The great players whom we lured into this pool became as caught up as Jorge and myself in the interplay, not just with each other but in the idea of music as an act of intercession, creating mantras whose energies are boundless.”

So are you trying to start a religious revival?

“Ancient shamanism has always been practised side by side with corporate religion; the old ways got dismissed as pagan, black magic, the devil’s work, etc… , and practitioners still get mercilessly persecuted. Countless devotees of Candomblé and Umbanda in Brasil have been strong-armed into renouncing the old ways as evil and pledging to Rome or the Carismaticos! Which is sad because at the same time we see countless awakenings worldwide to the wonder, elegance, and beauty in the panoply of Vodou and Candomblé.”

4. Yemanja
is the queen of the ocean, the good, nurturing mother of all. She is fertility and abundance. Often seen as a mermaid or a woman dressed in pearls and blue.
Reine Sophie Acadine • vocals | Hank Schroy • cavaquinho, violão, baixolão | Micah Gaugh • saxophone | Leon Gruenbaum • cz-101 | Jorge Amorim • percussion

7. Omolu
a.k.a. "Obaluaé", or "King of the Earth" in Yoruba.
He is perceived as being an old man, and is an extremely important Orixá, because he is connected with health, with the absence of disease.
Chief Dayo • vocals | Jorge Amorim • percussion

9. Oxossi
is the Hunter.
Often seen with a bow and arrow, he presides over Art, over freedom of expression.
He is the one that hunts for Axé (sacred energy).
Reine Sophie • vocals | Vernon Reid • guitar | Gustavo Dantas • violão | Leon Gruenbaum • CZ-101 | Micah Gaugh • sax | Hank Schroy • bass | Jorge Amorim • percussion

10. Ewa
is a divinity of song, of happy and alive things.
Possessing a rare enchantment and beauty, she is the queen of metamorphasis,
of organic and inorganic mutation and transformation.
Magali • vocals | Hank Schroy • cavaquinho, violão, bass | Jorge Amorim • percussion

12. Oxalá
is the Supreme Father.
He is the Orixá of peace, of balance, of fraternity, of union.
Symbolized by white, by purity. The positive equilibrium of the Universe.
Magali • voice

13. Nana
is the oldest Orixá. She was the first wife of Oxalá.
Those who are ledby Nana are calm and benevolent,
always acting with dignity and gentility.
Ileana Santamaria • vocals | Hank Schroy • vocals |
Jorge Amorim • vocals, percussion | Suphala • tablas

15. Maria Conga
Umbanda assimilates many archetypes from Brazil's diverse history. One of these is the "pretos-velhos", which means "old blacks". They are the spirits of the old slaves, brought from Africa.
They represent sage wisdom, strength, love, and charity.
Magali • voice | Jorge Amorim • percussion

16. Oxum-Maré
in Yoruba, means "rainbow" He is the pot of gold at the end of the rainbow,
represented by the sacred Serpent and the Rainbow.
Dambala Wedo is Oxum-maré's counterpart among the Fon based Lwa of the Vodoun religion of Haiti.
Erol Josue • voice | Hank Schroy • bass | Jorge Amorim • percussion