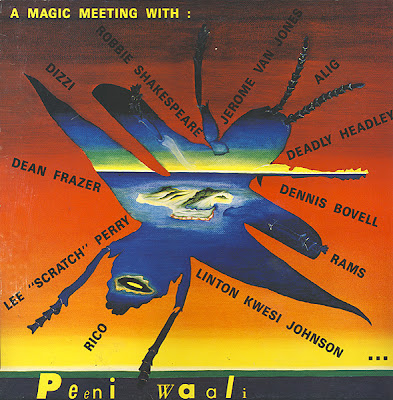 In 1987 Fizzé invited the reggae Heart Beat Band to record a maxi single with him, but they hesitated because they knew he had no reggae experience.
Determined to do the recording, Fizzé flew to Jamaica and met the late producer W. 'Jack Ruby' Lindo who took him to Kingston’s Dynamics Studio to hear a Sly and Robbie session, to meet musicians, buy records and to learn. One evening in Oracabessa, Fizzé was mesmerised by the extraordinary phenomenon of thousands of fireflies. It was an inspiring moment that would be the start of a 12 year exploration of a myriad of cultures.
Eventually Fizzé also met Rico Rodriguez who was to influence him greatly. Fizzé returned to Switzerland and recorded 3 tracks for Heart Beat Band, plus some of his impressions of Jamaica and its firefly, the Peeni Waali.
Fizzé returned to Jamaica in 1988 and recorded more music and overdubbed the rhythms he had prepared, working with percussionist Leon 'Scully' Simms, Robbie Shakespeare, saxophonist Dean 'Big D' Frazer, Leroy 'Horsemouth' Wallace and Felix 'Deadly Headly' Bennet .
Fizzé was hooked on reggae, loving its parallels with the blues but also its freshness.
Fizzé returned to Switzerland and worked in advertising for another two years but Rodriguez often recorded for him. Jerome Van Jones visited and recorded Duke Ellington’s Satin Doll and Blue Moon to Fizzé's reggae lines. In 1989 Fizzé contacted Linton Kwesi Johnson and Dennis Bovell and Beacon of Hope was born. Fizzé also met Lee Scratch Perry who voiced one of Fizzé's tunes, rapping about Liecht (light) & Stein (Liechtenstein was just over the border).
Peeni Waali the album was starting to take shape and it was released on his label in 1990, along with the Linton Kwesi Johnson album Tings An Times.